About me and this blog

Just ramblings from a guy in Knoxville who likes beer and is more than excited there are so many wonderful, local options now in this town. #knoxbeer #drinklocal

The weather is warming up and the festivals are in full swing.  Here's a quick rundown of beer news and upcoming events in Knoxville: 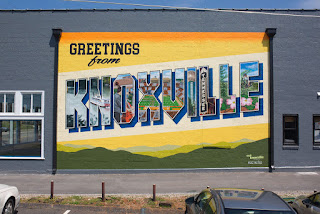 Enjoy your weekend in Knoxville!  Plenty of opportunities to enjoy a fine Knoxville beer this weekend, so take advantage!
Posted by Unknown at 12:38 PM No comments:

Spring has sprung in east TN and the beer news is coming quick.  Here's a few items to just make an attempt at keeping things fairly current.

Please hit me up at beerknox@gmail.com or @beerknox1 and let me know anything coming up or anything I may have missed.  Thanks!
Posted by Unknown at 1:30 PM No comments:

Only about an hour and half northwest of Knoxville is the home of ETSU and one third of the infamous Tri-cities, Johnson City.  JC is also home to 3 downtown breweries all within walking distance of each other making for a fine outing if you happen to be in the area or are just looking for something to do outside of town some weekend day.  I have a friend who works and lives in Johnson City so a few friends from Knoxville loaded up one Saturday afternoon and headed up there to check out the scene.  About 90 minutes to get up there and after a quick stop at my friends to drop off our things for the evening we caught a Lyft ride into JRH Brewing on the south-side of downtown Johnson City.

JRH isn't much from the outside, but is very nice inside, plenty of seating and a good size bar behind which you can order several different sizes of what they have on tap.  There is a great chandelier in the middle of the space and overall the environment is very cozy and inviting.  I settled in to the bar opted for a flight of several of their award winning selections and enjoyed them all immensely.  Reds aren't normally my favorite, but the Edgework Irish Red was a gold medal winner in the TN Championship of beers, so I had to give it a try.  And it was very good!  Check what they have on tap if and when you go and see what award winners they may be pouring and give them a try, especially if it a style you like.  I seriously doubt you will be disappointed with much you try at JRH. 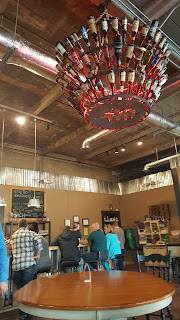 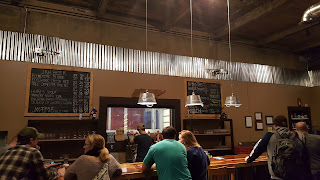 From JRH we headed northwest to the Johnson City brewer almost everyone has heard of, Yee-Haw Brewing Co.  Yee-Haw has spared no expense on this beautiful place.  The inside has a long bar and huge center table for large groups, which our party was by this time, and huge outdoor space anchored by a big firepit featuring the TN flag 3 star design.  Yee-Haw is a great place to hang out.  Their beers you are most likely familiar with and there really weren't too many surprises or too much different on the menu that evening.  One person in our party from out of town was a bit disappointed there were no IPAs available, but I just don't think that is their lane.  They did have the Big Hoppa double IPA on tap when we were there and I tried it along with their other high gravity selection, the Velvet Charmer.  Both were good selections and there is nothing bad here, but I surely wouldn't say anything at Yee-Haw is better than the beer down the street at JRH.  Yee-Haw's space is awesome though and having the White Duck Taco Shop adjoining the space with delivery to your table makes it even better.  You may not get any great surprises here with the beer, but you will get good, solid beer and a great atmosphere 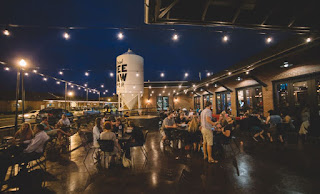 By the time we left Yee-Haw it was not late at all but some in our group were definitely feeling the effects of a beer tour despite one more stop to get to before closing time at Johnson City Brewing Company in the heart of downtown Johnson City.  To hear locals tell it, the downtown area of Johnson City was a ghost town as soon as about 8 year ago or so.  There are still empty storefronts through the main stretch, but there were people on the streets, quite a few good places to eat and a plenty to do even after the breweries close.  On this Saturday night about an hour before closing, the Johnson City Brewing Company was hopping.  The space here almost looked like an old diner with a bar that wrapped around the back corner half of the building.  There were a few small tables scattered through the front part where you walk in the door leading back to the bar.  Some of our party found seats at the bar and others gathered around one of the small tables and broke into the spot's collection of board games that are available to play while you are there.  The beers here were good and some of the selections most definitely are a bit experimental and different.  Reading the menu board it is quite obvious you are no longer sampling the straight, narrow and tested selections available at Yee-Haw.  The options here were things like Cranberry Wheat, Blackberry Pie ESB, Carrot Cake Ale and Rasberry Mocha Stout.  This place has some medal winners on the menu too, so go through all the selections (there were many when we were there) and find a good one or two in a style you like.  I had a couple samples of a few things the bartender suggested that were not for me and then settled on the Cascadian Dark IPA, which was a 2016 silver medal winner.  It was definitely good, I wish I wasn't so many beers in by the time we got there or I would probably know better just how good, but it was good.   If you are into different flavors, this is definitely the place for you. 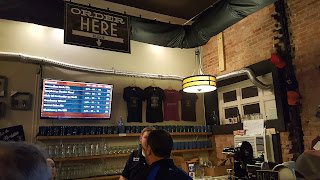 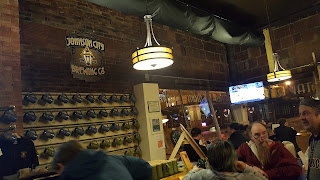 We ended up closing down JCBC and then stumbled down to a local watering hole within walking distance to end our evening.  Overall, the trip up was worth it and I would suggest it to any Knoxville beer lover for a change of pace.  The selections at the 3 places is varied enough to make all 3 worth a stop in.  JRH was my favorite beer, Yee-Haw was my favorite place and Johnson City Brewing is a place you just have to go sometime to experience.  Put a short trip up to Johnson City on your list of things to do, if you haven't been already.  You won't regret it.

Posted by Unknown at 4:09 PM No comments:

Another run through a few happenings as of late around town for Knoxville beer fans.

I am sure I am missing a lot of news since my last time, but I am going to leave this here for now and hope to be back soon with more.  I am taking a trip to Johnson City to hit up Yeehaw, JRH and Johnson City brewing very soon.  Look for a report from that trip right here in the next week or so.
Posted by Unknown at 11:39 AM No comments:

Had a bit of an unplanned hiatus from posts here, but will be trying to keep up a bit better and at least post things semi-regularly from here on out.

For a little catching up....

Stay tuned for more Knews and an upcoming trip report from myself as I hit Yeehaw and other spots in Johnson City in a few weeks.

Posted by Unknown at 3:17 PM No comments:

Not too long ago I finally got the opportunity to visit Schulz Brau take a look around, hangout and have a few beers.  Schulz Brau sits on Bernard Ave. just off a Central a little ways up from downtown, but not quite to Happy Holler.  It's kind of between Magpies and Hops and Hollers.  The outside looks like a cinder block castle and frankly looks pretty odd.  But don't ever let the outside scare you away, inside is where it starts to impress.  The place is gorgeous inside.  Nice tables, beautiful bar and video board menus hanging above the bar.  No expense looks to have been spared inside and just out the back door is a quite roomy biergarten for enjoying beverages and hanging with friends.  The beers are good too.  I was partial to their Schwartzbier myself, but also enjoyed their dunkel.  They rotate a good selection of their own beers mixed with a lot of regional craft brews and some national ones as well.  When I was in all were served in various sizes, so choose a smaller size and sample a few if you like....or if you know what you like get the big stein. 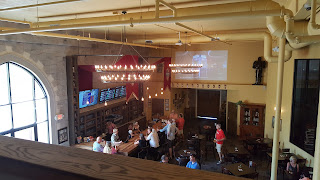 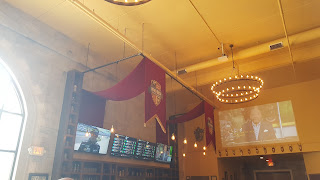 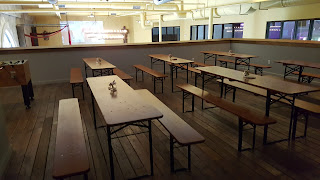 Ala in all this place is worth a visit and could see them getting busy as the Vols football schedule gets ramped up to bigger games this fall.  Their outdoor area could be a huge draw once the temperature outside dips just a little and fall is here.  Spots at one of their many outdoor tables shipped over from Germany could be rare, so get there early and enjoy what they have to offer.

Posted by Unknown at 3:41 PM No comments:

The latest in Knoxville Beer Knews....

Promote Your Page Too